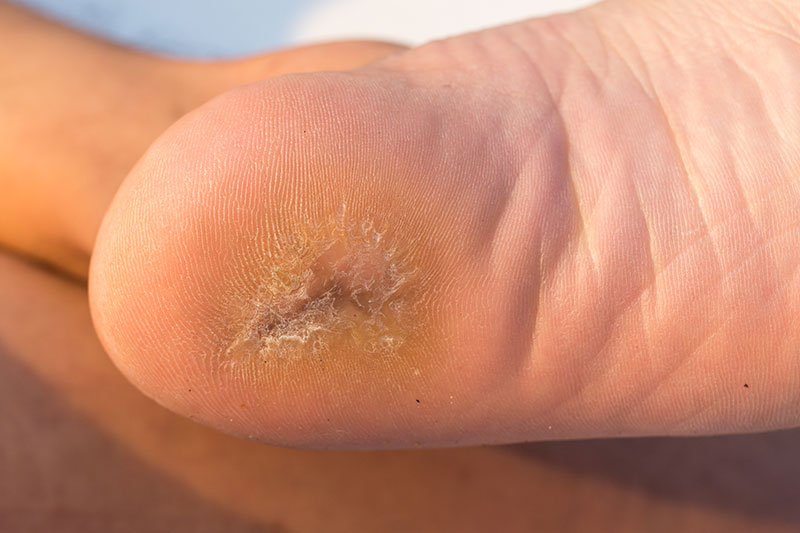 Corns are actually distinctively shaped dead skin or callus which is usually found in glabrous (smooth and hairless) or thin skin surfaces especially in some dorsal surface of fingers and toes. Corns sometimes occurs on the thicker plantar or palmar skin surfaces. The formation of the Corns is caused by the pressure points which are the skin traces in semi-elliptical or elliptical paths during the rubbing motion. This would gradually widen the part which is already at the point of pressure. The skin will begin to grow as a corn if there exists constant stimulation of the tissue which produces Corns even after the corns are removed surgically.

The dead skin which is usually hard and the thickened areas of the skin forms consequence of friction or rubbing is a corn. These are formed mostly on the feet and makes the walking very painful. In the toes, the corns occur on the sides and top. A hard corn is described as a dead skin which is very hard or thickened where in the middle exists a small plug of skin. A soft corn is rubbery and appears to be whitish which has a thinner surface compared to the hard corn and occurs between the toes. Another type of corn is the seed corn which appears to be clusters of the tiny corns and can be tender if it occurs on the weight bearing part of the toe. This type of corn usually occurs at the bottom of the feet and the doctors believe that sweat ducts are the reasons for this condition.

Most of the corns are caused by ill-fitting shoes and some of them due to improper walking style. High-heeled shoes happen to be the best offenders because it puts pressure on the toes and this makes women four times more to have foot problems than men. Foot deformities and wearing the shoes without socks can cause the occurrence of corns on the toes. Usually, soft corns are caused by pressure or rubbing.

A skin biopsy will be taken at the first place by the doctor. Sometimes imaging studies are used to check if there are any bone abnormalities which causes abnormal pressure over the skin. CT scan is preferred in this situation.

The paring of the lesions is the treatment used against the corns which reduce the pain. Another method which can be considered is the use of a corn plaster, a ring which consists of salicylic acid which erodes the hard compact skin and relieves the pressure. But there is a chance of the corns to return if there is an abnormal pressure. Using more comfortable and expensive branded footwear will help in avoiding the corns to affect your toe. Surgery is very well recommended if none of the other options are effective.