5 common rashes that cause foot irritation 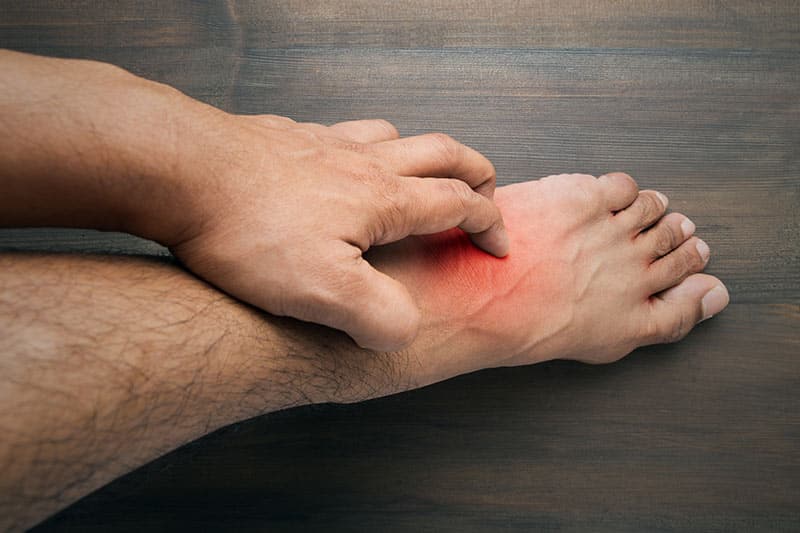 Rashes are an indication of unhealthy skin. Most people tend to take a rash lightly, mainly because this sometimes doesn’t affect your daily activities. This might be uncomfortable and annoying at the same time especially if it is itchy. To take care of the situation, we need to first understand the cause, and only then can we control it effectively. Some of the most obvious causes, though not the only ones are:

1 Primary Irritant Dermatitis
When the skin of the foot is exposed to chemical substances; it brings about conditions such as dermatitis which can cause a skin rash.

2 Athlete’s foot
For this particular one, it’s a common rash that affects the skin between the toes and sometimes spreads to the nails. The skin cracks and starts to turn reddish on the affected areas, and may worsen if not attended to in proper time. This rash is caused by a fungus that mostly thrives in moist places. Its preventive measures are simply putting on slippers when going to the bathroom or public pools for example to avoid the chances of an infection.

3 Eczema
At number three, there might be much to say with regards to skin irritation. Sometimes it causes the skin to be inflamed and sometimes shows up for others when under emotional stress. It occurs when the skin encounters an irritating substance such as a chemical in shoes. When this becomes persistent, the rash is now visible and will start to irritate if unattended to for some time.

4 Psoriasis
Psoriasis is a chronic condition that affects the skin, mainly brought about by speeding up the life cycle of skin cells, thus causing them to build up rapidly on its surface. This extra skin now forms red patches which turn out to be itchy and painful. This condition may worsen and in the event that it affects your daily routine, then seeing a doctor might be necessary.

5 Allergic Contact Dermatitis
And finally, just like any other part of your body, the skin might be having an allergic reaction towards some conditions it gets exposed to, and may lead to rashes on your skin causing the itching and irritation. This irritation may be caused by poison ivy for example, which is a common source and in some other case, it may be dyes or other chemicals that are found in socks and shoes. These conditions come with varied symptoms, and they may include skin inflammation and an itchy effect. Whatever the reason, it’s advisable to seek medical advice in any case.